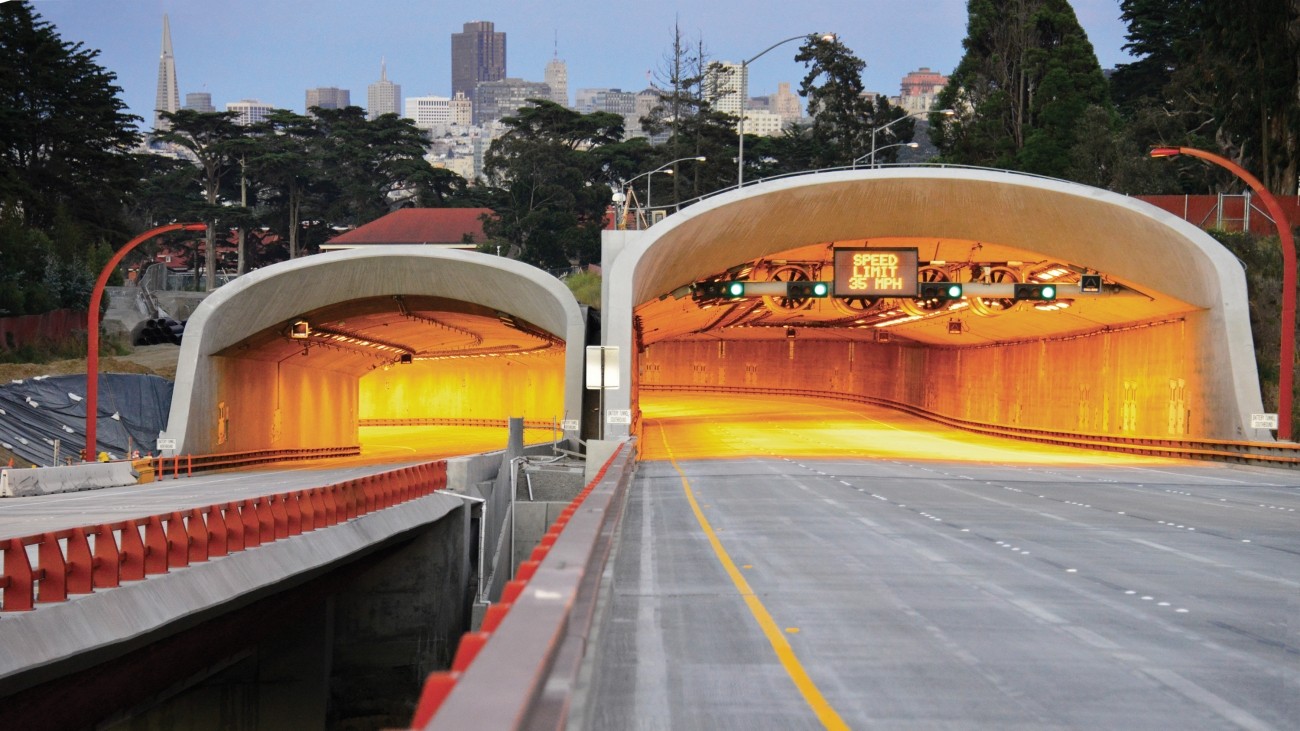 The Presidio Parkway serves as a regional gateway between the Golden Gate Bridge and the City of San Francisco. The parkway is a replacement of Doyle Drive, a 1.6-mile segment of U.S. 101 that reopened on July 12, 2015.

Originally built in 1936 as one of the New Deal projects, Doyle Drive had reached the end of its useful life after over 75 years of use.

Caltrans and the San Francisco County Transportation Authority jointly led the effort to replace Doyle Drive. The work was done in two phases: The first phase was built using a traditional design-bid-build approach and the second via a public-private partnership. The latter enabled the project to be built sooner and includes a 30-year maintenance agreement by the private concessionaire to ensure the roadway remains at a high level of operational and maintenance performance for the public.

A community-backed design for the Presidio Parkway was chosen in 2009 after years of intensive regional coordination, environmental review, and interagency planning. The project was carefully designed to withstand the maximum considered earthquake for the region, improve traffic safety, and improve access to the Presidio and Golden Gate National Recreation Area.

The Doyle Drive replacement project was jointly led by the Transportation Authority and Caltrans.

In addition to funding provided from Transportation Authority's Prop K transportation sales tax and the State of California, the Metropolitan Transportation Commission and the Golden Gate Bridge Highway and Transportation District committed regional funding to the project.

Originally built in 1936 as one of the New Deal projects, Doyle Drive served as one of San Francisco’s key access roads to the Golden Gate Bridge. After over 75 years of use, the route, also known as U.S. 101, had become structurally and seismically deficient and needed to be replaced.

Since the early 1970s, Caltrans had been preparing plans for updating Doyle Drive’s aging infrastructure. Various studies were conducted and in 1992, the San Francisco Board of Supervisors established a Doyle Drive Task Force to consider Caltrans’ design concepts and determine a preferred replacement. In February 1993, the task force submitted its recommendations to the Board of Supervisors. In that same year, Caltrans completed a Project Study Report in that same year, which contained several alternatives for the replacement of Doyle Drive and took into consideration the recommendations of the Doyle Drive Task Force. This report was the first step toward securing state funding for the project.

In 1996, the Transportation Authority completed the Doyle Drive Intermodal Study, which called for the following features to be included in the replacement project to support multimodal transit:

Environmental assessment for the project began in 2000, and the Draft Environmental Impact Statement/Report was released in 2005. On September 26, 2006, the Transportation Authority Board unanimously selected the Presidio Parkway alternative, a design created by local landscape architect Michael Painter.

Input received during the comment period, as well as refinements to the Preferred Alternative, are reflected in the Final Environmental Impact Statement/Report that was circulated in October 2008 and certified on December 16, 2008. To ensure that the project reflected community needs, a comprehensive public involvement and agency coordination program was conducted. Community consensus on the project’s design was achieved in 2009.