The Women Who Led the Presidio Parkway and Tunnel Tops 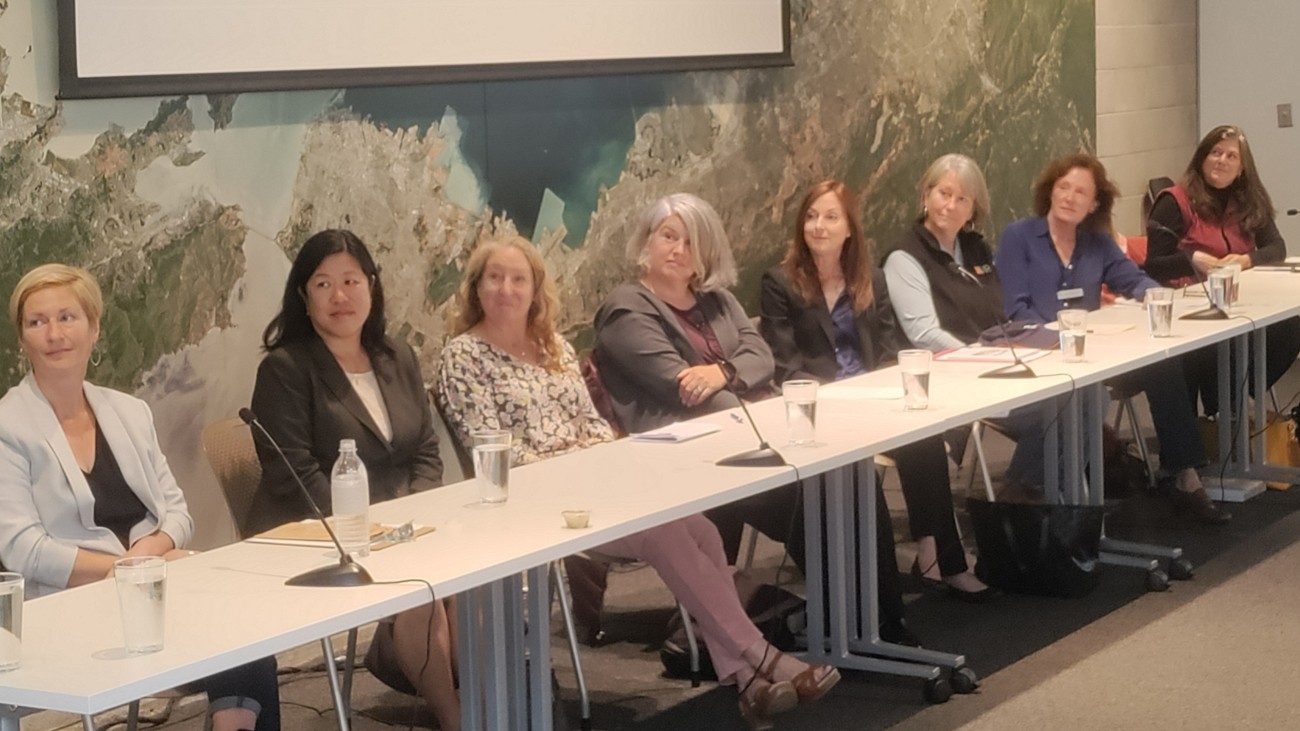 From the project’s conception in 1991, the Presidio Parkway and Tunnel Tops have been a 31-year project in the making, a testament to bold ideas and a new vision. Women were the driving force behind this vision and rethinking of what replacing the seismically unsafe Doyle Drive could be.

On September 15, SPUR hosted a program celebrating the women who held key roles as designers, project managers and contractors in making this visionary design a reality.

For many of these women, their professional and personal lives were closely intertwined. Several women balanced having children and growing their families during different phases of the project. Some of their children often visited them on site.

Meet the women panelists who shared insights on their roles, challenges, and stories of collaboration in making it all happen.

Tilly Chang, San Francisco County Transportation Authority’s Executive Director, played a key funding role for the project. Initially as a planning deputy at the agency, Tilly applied for grants alongside Jose Luis Moscovich (Executive Director until 2013), who championed this effort as a regional issue.

In 2006, Tilly became more involved when she proposed an innovative approach to transit infrastructure: putting a toll on Doyle Drive. The toll idea got the attention of various stakeholders, including then-San Francisco Mayor Gavin Newsom, who called officials from San Francisco, Marin and elsewhere to the table. What emerged from those talks was the first and only public-private sector partnership to date in California  after Speaker Nancy Pelosi led the effort for obtaining federal funding.

Sabine Vandersluis was the project engineer during construction for Parsons Brinckerhoff (now WSP USA), overseeing operations, contracts and planning. Always on the ground, she kept the project moving forward as every idea and alternative for the tunnel structure was modeled.

As an associate with MPA Design and one year out of college in 2001, Darcie Delashnutt recalls it being both the biggest job she had ever worked on and also the biggest in the office. Working on the roadway, Darcie knew she was on the precipice of transforming the landscape, design thinking and making history in the process.

As Presidio Trust Senior Project Manager, Paula Cabot and her team set the project’s tone by driving initiatives and processes, mediating disputes, enforcing institutional rules and regulations and helping expedite projects. Paula noted, “For the first time in my 35-plus years, I saw more women on this construction site than I ever have…That’s unheard of. The other thing that’s incredible is that I also saw women in the trades, like masons.”

Stepping in as CEO at the Golden Gate National Park Conservancy in 2019, Chris Lehnertz began leading the tail end of the public-private partnership campaign that raised a total of $98 million in private donations, by far the largest single campaign for the Conservancy to date. Chris said: “To build new parklands, in the Park Service, this was a mind blower.” Chris also noted that the campaign came together from the hearts and determination of the Bay Area community to make this a reality.

Allison Stone, Director of Park Programs at the Presidio Trust, highlighted the Park For All vision and human element of this effort. A key factor driving this project has been reaching audiences that historically haven’t felt welcomed, including marginalized communities and people with disabilities. The Tunnel Tops has created a platform for the park through community input, partnerships and daily food and beverage pop-ups, bringing the national park closer to a broader audience, with an increase from five to 40 percent first-time visitors.

As Senior Project Manager with Circlepoint, Molly Graham developed and implemented community engagement during the planning and construction phase through public outreach and communications plans, including bike rides and other interactive activities.

Lauren Roan was the project architect with the architecture and planning firm EHDD, responsible for designing the Field Station, the Visitor Center and the Transit Center. Lauren and her team ensured that the Field Station would interconnect seamlessly with the landscape and the Youth Outpost.

As a dedicated volunteer with SPUR, the only non-profit organization who had a seat at the executive committee meetings, Amanda Hoenigman helped play a unique role in encouraging collaborations between organizations that often had very different priorities and participated in grueling design discussions.

Already over half a million people have visited the Tunnel Tops since its opening in July 2022. The Presidio Parkway allowed talent to emerge as a generation of women rose to management and executive ranks through these projects, with more on the way.

The trailer for the documentary, “A Parkway for the People,” commemorating the talented and passionate individuals who overcame obstacles can be seen online before the film’s projected release later in 2023.